Research shows that the media report more stories about illicit drugs than alcohol, and that the stories about drugs are more negative than those about alcohol. This is demonstrated in an article in the Herald Sun by Wes Hosking entitled “Police question drug and violence marred Rainbow Serpent Festival’s future”. In this and other media coverage of the festival, Inspector Bruce Thomas cites what appear to be alarming statistics. Specifically, he says that there were allegedly three sexual assaults and four physical assaults. But these statistics need to be put into context. There were over 20,000 attendees at the festival. Imagine a gathering of 20,000 people and the amount of alcohol-related incidents that might occur on Australia Day. And this is just one day. The Rainbow Serpent Festival runs for almost 6 days, including Australia Day! 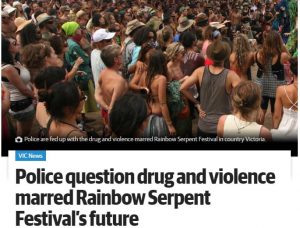 As board members of Psychedelic Research in Science and Medicine, we volunteered at the recent Rainbow Serpent Festival with DanceWize to deliver harm reduction strategies to festival goers, including providing a safe space for people who were feeling distressed to process their drug-induced experience. Having personally spoken to the police on-site, they stated to us that they thought the crowd was well behaved and noted that they might not be so well behaved if alcohol was attendees’ primary drug of choice. Rather, most people we saw were consuming Cannabis, LSD and MDMA.

So what does the evidence say about whether alcohol or other drugs is more likely to lead to violence?

Most violence linked to alcohol and other drugs in Australia is due to alcohol, with 26% of Australiansreporting they have been affected by alcohol-related violence compared with 3.1% who reported being affected by violence related to illicit drugs.

Despite rates of alcohol consumption remaining relatively stable in Australia between 2003 and 2013, there was an 85% increase in alcohol-related family violence over the same time period. While some drugs such as methamphetamine (“ice”) have been implicated in a recent royal commission with an increase family violence, the degree to which it plays a role is not clear.

How does this happen?

In understanding how alcohol and other drugs mediate violence, we need to consider how they work in the body.

As people drink alcohol, they experience reduced functioning of the pre-frontal cortex of the brain, a part that plays an important role in how people regulate behaviour and make decisions. When people drink, they tend to make poor decisions and are more likely to react emotionally to situations in which they might normally respond with more reason and reflection. When people drink they are also less likely to consider the possible consequences of their actions.

MDMA (“ecstasy”) works in a different way. It leads to a release of serotonin in the brain so people tend to become empathetic towards others and emotionally open. So, MDMA is rarely associated with violence. That’s the case unless people take it with other drugs such as alcohol or stimulants, or they take what they think is ecstasy but really is a new or otherwise harmful drug. Ecstasy might contain drugs other than MDMA – many of which can cause significant harm. As previously reported on AOD Media Watch, this was recently seen both on the Gold Coast and in Melbourne, when people unintentionally consumed Ecstasy that contained drugs other than MDMA, and led to a number of medical emergencies and some deaths. This has led to many researchers to call for pill testing to be implemented in Australia. 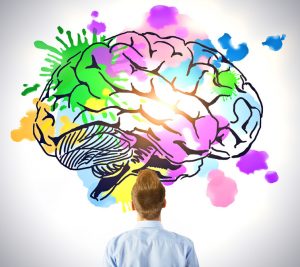 LSD (“acid”) is a psychedelic drug that binds to certain serotonin receptors in the brain. In doing so, LSD can lead to significant changes in consciousness and perception that are therapeutic in clinical settings. But people can become overwhelmed by the changes in perception caused by LSD at festivals, leading some people to become distressed and occasionally unaware of their actions. There are no studies showing a clear link between the use of LSD and violence.

Anecdotally, we have rarely seen people become violent as a result of their distress after taking LSD at festivals. However, as with ecstasy, there is no quality control of the illicit drug market in Australia and some people have had violent reactions or self-harmed as a result of unintentionally consuming NBOMe drugs sold as LSD.

So, it would appear alcohol is far more likely to be associated with violence than MDMA or LSD.

Widespread use of alcohol

A key factor in this situation, of course, is that alcohol is arguably the most widely accepted social tonic in western society. The most recent data show that about 80% of Australians aged over 14 drank alcohol in the past year, with 6.5% drinking it daily.

While most people consider its risks to both personal health and community safety manageable,research suggests its widespread use makes it the most harmful drug due to the impact it has on others in terms of violence.

But most illicit drugs are recent arrivals in western society and have been subject to widespread prohibition rather than regulation. So, it is hardly surprising that fewer people use them. The most recent data show that about 7.2% of Australians aged over 14 consumed “ecstasy” in the past 12 months, 2.1% had used methamphetamine and 1.3% had used a psychedelic drug, such as LSD, in the past 12 months.

Ultimately, we need more research to confirm, despite the acknowledged risk of other harms, that drugs like MDMA and LSD have a low potential for causing violence compared with alcohol.

The media should be more responsible in how they report on alcohol and other drugs, particularly given the consistently high rates of alcohol-related violence compared to violence linked with other drugs.

People who use illicit drugs are also a minority and it is important the media does not further marginalise this group by using stigmatising language. Clearly Rainbow Serpent Festival was not marred by violence, though by associating violence with drugs, stigma towards people who use drugs is perpetuated.

This article was adapted from a piece published on The Conversation. Read the original article.